Hey Everyone! A little side note before I get into this post - Ben had YET ANOTHER cold. Seriously? Geez. He was at 100% for not even two weeks. I noticed a runny nose early last week. He has been MAJORLY irritable at bedtime for the past 5ish nights (although last night was an improvement, TG), and he had a bit of a fever on Saturday. He was fine and fever-free yesterday evening/this morning, and seemed happy, so off to daycare he went. He still has a runny nose, but at least all of the snot is escaping. I am coming to the realization that a runny nose is going to be par for the course. Also par for the course: dried snot on my shoulder. Dried snot is the new black, did you know? The semi-good news is that I didn't catch this one. So at least *my* immunities are getting iron-clad. Although, I feel a bit guilty that he is sick, and I am not. Poor guy has to go through it on his own.

SOLIDS! Last time we talked, he was starting his rice cereal at four months. I talked about this here. He has taken to solids like a duck to water. Like a bear to honey. Like a moth to a flame. He pretty much eats anything I give him. He loves all food. Just like his mama.

We fed him the rice cereal exclusively for about a week. Then, I started jarred sweet potatoes. I would just give him a few tablespoons of food after daycare. About a couple of weeks in, I started sending a 2.5 oz jar with him to daycare for them to feed him at lunch. He would eat the whole jar, and that would be the only solids he would have for the day. A couple of weeks ago, I started adding in another meal, either rice cereal in the morning (with a bit of fruit mixed in) or a jar of veggies or fruit in the evening. The past couple of days, I have been doing both. So now, he is having three "meals" a day. Rice cereal in the morning (made with breast milk and a bit of fruit), a jar for lunch, and a jar for dinner. We are still using the smallest jars - 2.5 oz. He has had sweet potatoes, apples, bananas, carrots, peas, and pears. He eats them all, but especially likes the apples and bananas. We would wait about 3-4 days between giving him anything new, to see if there was any allergic reaction. 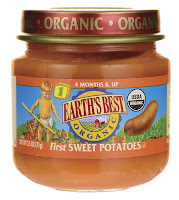 The solids intake does not seem to affect his nursing/breast milk intake. He still drinks the same amount at daycare and the same amount from me on the weekends. Occasionally, I will notice that he is not as hungry after daycare in the evenings, but I think this is from having too much bottled breast milk, not the solids. He has the breakfast of rice cereal after he has nursed in the morning. If it is the weekend, I also give him the lunch after a nursing session. Last night, I nursed him, he had some dinner, and then I nursed him a bit again before bed.

The reason I started feeding him more a few weeks ago is twofold: (1) I noticed that he seemed to really like to eat and (2) the doctor said I could feed him as much as he wanted whenever it was convenient for me. He told me that when I took Ben to the doctor when he was sick at the beginning of August. Ben also weighed about 15 1/2 lbs. then! I am so curious about his measurements at his six month appointment. He will be six months old in a week! Time flies!

I am still using Earth's Best rice cereal, and I mostly buy Earth's Best first foods for the jarred food. I have also used the organic Safeway brand. I use these bowls from Munchkin: 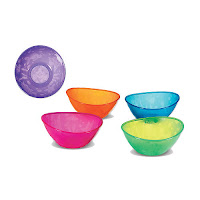 I bought them because they were BPA free, microwaveable, and dishwasher-safe. I know technically that you are not supposed to microwave the food, but I do anyways. I nuke it for about 10 seconds, and stir very well. It has been fine. I like the bowls so far. I bought these spoons, also Munchkin: 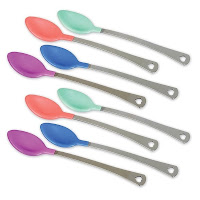 They have worked fine so far. The "color changing" aspect of them is useless. The spoon is supposed to turn white if it is too hot. First off, I stir very well and taste the food myself, so I don't really need that function. Second, you can't see the damn spoon to see if it has turned white when there is food on it. Third, they get discolored from the dishwasher and food. I am going to buy some new spoons soon that are better for Ben to use himself/play with. I want him to get used to holding the spoon, but I don't like to let him play with these spoons because they are long and metal. It seems like he could harm himself. So they have been perfectly fine for the past couple of months, but I am in the market for some new ones.

We received a ton of bibs as gifts, and they have all been great. We go through them pretty fast, because he goes through a bib every time he eats. If I had to buy more, I would probably get these:
We have plenty though, and the next bibs I buy will probably be those plastic ones with the catchers for when he is eating finger foods. I have put a hook on the wall in the kitchen and hang the bibs from it. Super handy!

I am also in the market for some small cups. I am excited to let him try drinking water from a cup soon! I will let ya'll know how it goes.