Introducing Shelby! Dan and I got Shelbs about three months before we got married. I don't recommend doing that, but it worked out for us. We got her as a puppy, and she looked like this: 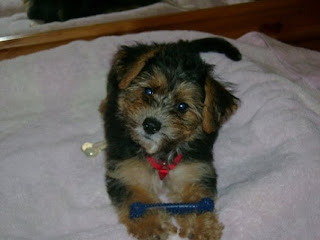 Pretty adorable, right? We had big plans for her to sleep in her crate at night, and lots of other things, but she ended up sleeping with us at night in the bed and pretty much ruling to roost. It's true that having a dog dips your toe into the pool of parenthood. I'm not saying it's the same, it's not. However, we had responsibilities when we got her that we took seriously. We had to go straight home after work to take care of her (no spontaneous happy hours). We had to plan our mornings more and, of course, make arrangements for her during the day. If we want to go somewhere in the evenings or the weekends, we had to figure how long we could be out before we needed to get home to let her out. If we were going out of town, we had to make arrangements. We were responsible for feeding and growing another living thing. Here she is now: 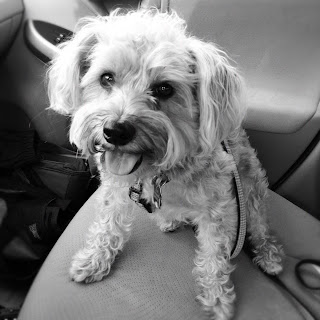 Still adorable. Shelbs loves most people and other dogs (although she has her moments) so imagine our surprise the first time she freaked out at a kid. Turns out, she doesn't like them. She never had a bad interaction with one, she just wasn't familiar with children, and decided they couldn't be trusted. They were short, unpredictable, and loud. They weren't quite mailman status, but still. Being the breed she is - yorkie/poodle mix - didn't help. So Dan and I were a bit worried about how she was going to react to Ben. Here are some things that we did. Maybe they helped, maybe they didn't. But, we are all co-existing happily currently (knock on wood), so take it for what it's worth.

1. Trial Run: We were lucky enough to have a friend with an infant come visit us twice while I was pregnant. I was amazed that Shelby was fine with my friend's baby. I think it made me realize that baby was different from kid for her. She was interested in him, but wasn't obsessed with him and didn't act aggressively towards him. He pretty much stayed put, and she did her own thing. This took some of the worry away from me and allowed me to relax.

2. Set Up: We had everything pretty much set up baby-wise, so Shelby had some time to get used to all of the gear. I did not make her listen to tapes of babies crying. I figured - why put her through that misery until it is absolutely necessary? I figured it would just annoy her.

3. Blanket from the Hospital: We did this tip, which I am sure everyone has heard. Take a blanket with the baby's smell from the hospital (our sweet nurse just gave us one of the receiving blankets). Have your husband bring it home (before the baby comes home), and let the dog sniff it. Do NOT let the dog have her way with it (tear it apart or something). Let her explore the smell for a while, then take it away. Shelby was obsessed with the smell on the blanket. So much so, that I was a bit worried. But she was just really into what the smell was.

4. Introductions: I had read that it was good to do the introductions outside of the house (like in the driveway or porch) so that the pooch can have the first sniff on neutral territory. However, it was snowing. There was no way in hell I was going to have my newborn out in the snow so my nutty dog could sniff her. So in we went! I did make sure to greet Shelby myself while Dan carried Ben in. I had read this somewhere. And then we had the highly anticipated first sniff with me, Dan, my parents, and Dan's mom an inch away, all holding our breath and holding onto Shelbs. She was VERY interested, but not aggressive. 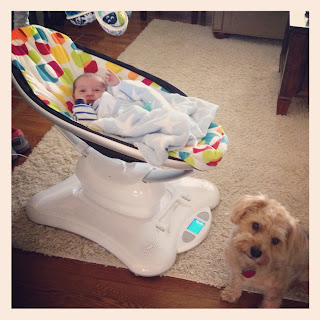 Shelby is wondering why people are taking
pictures without her in them. Confusing.

5. Routine/Walks: We did our best to maintain Shelby's walks after we got home with Ben. I think this gave her some sense of normalcy and, of course, exercise. Dan had three weeks of paternity leave (amazing!), so he would walk her, and I would stay home with Benji. I think this also gave Dan an excuse to get outside and clear his head. After Dan went back to work, I got my butt outside the door and walked Shelbys with Ben. I experimented with various wearing, but ended up using my stroller. I could put it all the way down so that it was flat, and I used an infant insert for extra cushioning. If I didn't have Shelby, I definitely would not have been taking these walks everyday. So it was great for making me get out of the house and get some fresh air.

6. Let the Dog Near, but Stay Close By: We didn't want Shelby to think of Ben as some sort of forbidden fruit she should be obsessed with. So we wanted to let her, under strict supervision, get close to him. We never leave them alone, even now. Now that he is moving more, Shelbs is a bit more curious and wants to get in his face and sniff. I tell her "off." I want her to be comfortable with him, but I also want her to keep a respectful distance. I let her have a little more leeway if I am holding him. He has already grabbed a handful of her hair, and she was like - what the hell?!? But she didn't bark or growl or anything.

7. Address Problems, but Don't Freak Out: Shelby had a weird thing with the Mamaroo when we first brought Ben home. We had had the Mamaroo out beforehand, and it didn't bother her. But whenever we would put him in it or take him out of it, she would run up to it, bark, and act agitated. I'll be honest, I did freak out in my head a bit. I thought, oh no! Here is the beginning of the craziness! But what we did was try to remember to give her a treat and make her sit before I put him in and took him out. Eventually, she just got used to it, and it was fine.

All in all, things are going pretty well. Shelby loves to sit next to me while I feed Ben on the couch. I try to give her a pat now and then during. She follows us up to the nursery when it is changing time in the morning, and she always gives Ben a sniff when we get home. There are times though when not having her around would be easier. She constantly is scratching at the door when I am sitting down and feeding Ben. She barks as passersby while Ben is sleeping. But, we love her. It should be really interesting to see how things evolve once Ben is mobile. I know that it will be an adjustment, but I am hoping that since it is gradual and Shelby knows Ben, it will be fine.

Wouldn't it be amazing if they were best friends? (Haha.)